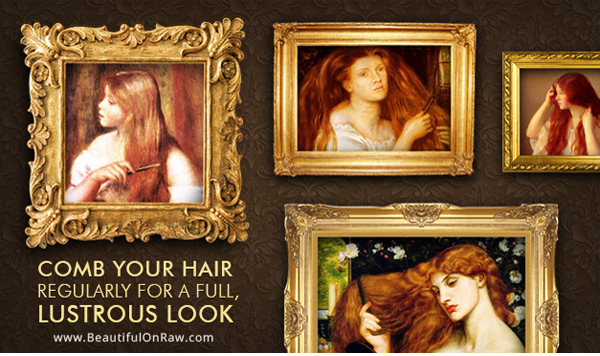 A few days ago, two new ladies appeared at my beginners' ballet class. Age-wise, both seemed to be in their late-sixties. They'd taken ballet in their younger years and even now were performing remarkably well. They looked very fit and either could pass for someone ten years their junior. Except for the state of their hair. Both had very thin hair, with bald patches. This condition is much more easily prevented than reversed.

The above paintings by August Renoir, Dante Gabriel Rossetti, and William Paxton exemplify the ancient and continuing practice of women combing their tresses.

Combing Therapy... It's an unusual term. But it's a well-legitimated ancient health care method. It is used to regulate what Chinese medicine calls the meridians and to balance the internal organs.

Traditional Chinese medicine holds that all the meridians of the body directly or indirectly connect with the head. Thus, stimulating the scalp can have important healing effects on the body's overall health. Combing therapy well fits that model.

This procedure helps open the pores by removing dirt and dead cells and distributes oil from the scalp towards the ends of your hair. The capillaries on your scalp will become unclogged and more nourishment will reach the hair roots. Combing massages the scalp and stimulates hair growth.

The minimum that you need to do to keep your hair healthy and beautiful is this...

Recently, some experts have begun to scoff at the time-honored tradition of a woman’s combing her hair a hundred strokes a night. Why?

Well, this is a symptom-oriented approach—they say you’ll just be pulling out hair. They’re right. You will be pulling out some hair. Weak hair. Hair that is in the shedding phase, known as the exogen phase, that was going to fall out anyway. More in the article: Hair Cycles: How it Grows and Why it Sheds. Meanwhile, your most healthy hair is seated quite firmly in your scalp—it’s not going to be pulled out easily.

To gain the full benefits of the traditional combing treatment, you'll need a well-made wooden comb. This article Combing or Brushing Your Hair... Which is Better? explains the reasons.

Our new peach wood comb is seamless-crafted from a single, solid piece of select-grade peach wood. Its ultra-smooth finish and comfortable design will assure you of an easy, tangle-free comb-out every time.

Why a wooden comb, specifically? First, it's anti-static, leading to much less frizz! Its gentle action will greatly reduce split ends. It will stimulate your scalp, promote even oil distribution and assure general good hair health.

In 2014, I went to China for ten days, for my son's wedding. I neglected my own scalp treatments for that entire time. This time off and the stress of travel did my hair no good. More hair fell out and new growth slowed. It was three months of disciplined scalp treatments before I was back to my usual self. Yes, after 50, hair is that demanding. 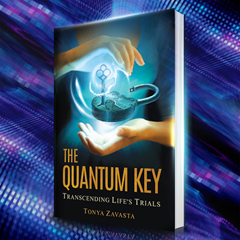 In my new book, The Quantum Key, I wrote that "IBM researchers claim they're now close to a technology that will allow them to build a "minimum" quantum computer. It might happen any day. Maybe it already has, and you'll read about it tomorrow."

As soon as I sent the book to print a team of Google and NASA engineers announced that they have developed a quantum computer. It's the D-Wave 2X Quantum Computer. There's just one, buried in a Silicon Valley site, part of a Google-NASA joint venture.

The D-Wave is smart. And astonishingly fast—as much as a hundred million times faster than even the best computers we have working today.

We're entering a new era of computing, when our old worldview will come crashing down. And this worldview shift won’t be as gradual as accepting that the Earth is round.

It’s a quantum universe! From galaxies down to neutrinos—even in the realm of human consciousness—it’s a new game, with new rules.

My new book The Quantum Key might seem to be outside my usual line. The Quantum Key is—make no mistake—a book very much in line: It is about health and beauty and anti-aging. But it goes far beyond broccoli and facial scrubs.

I got to thinking…Quantum physics has brought both science and technology to unimaginable heights, with no limit yet evident. Why not use key ideas from quantum physics in dealing with life's trials, including aging? That’s exactly what my new book The Quantum Key: Transcending Life's Trials is all about...

Love the Comb and Exfoliator!

Hello Tonya, I just wanted to write to let you know that I am thoroughly enjoying the several products I recently purchased from you website. I have been using your scalp tonic for a while now, and… Read more
D. (October, 2012)