Those Miracle Anti-aging Procedures: What Are You Missing? 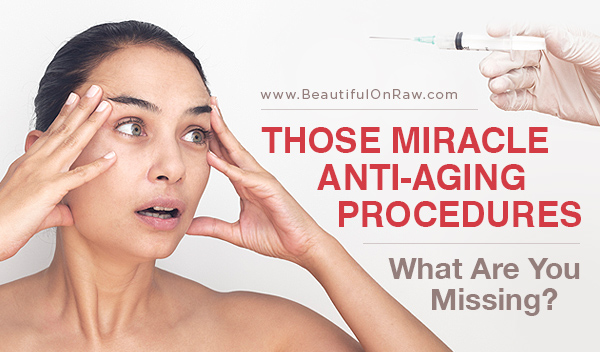 Earlier in the summer I was going to an advanced stretch class, designed specifically for dancers. For 50 minutes we were helping each other, pushing and pulling one another’s limbs for extra stretch.

For the grand finale, we divided into groups of four. Split time! Each group had two mats set a foot apart. Legs were positioned with one on each mat, leaving butts hanging in the middle. While one person was in position, two people were holding their legs on each mat for support, with the fourth pushing on their shoulders to help them achieve the coveted split.

My teammates were all high school girls. I let them go first. The girls struggled, missing the full split by a few inches. They were all disappointed that things were not happening as easily as they’d like. When my turn came, my split must have been a little deeper than theirs, because one of the girls exclaimed:

“Wow! You are sooo flexible!”
Said the other: “Of course. She has artificial hips!”

I was about to chuckle when I realized she wasn’t joking. The girl was dead serious about my “advantages.” I was dumbstruck at the absurdity of it. Then a sad realization was sinking in: this is a generation conditioned into believing that the artificial, or surgically enhanced, is better than the natural.

The girls of this generation are given birthday gifts of cosmetic procedures, nose jobs and boob job. There is even a “Teen Botox” to prevent wrinkles in the future—or so they are told.

It’s hard to be young. But it’s also hard for older folk to see age-related changes and not feel tempted: What if this new cosmetic procedure CAN perform a miracle? I get queries about new “wonder procedures” all the time. 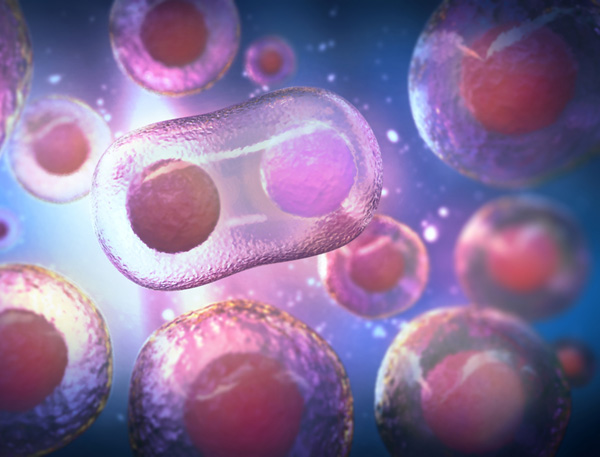 Q: Tonya, have you heard of Novadermy? They don’t say what they’re going to do, but it sounds better than plastic surgery. They promise close to miraculous results in just 10 days.

A: Novadermy involves stem cell therapy. The stem cell therapies are hugely controversial around the world and are the subject of government regulation—or the talk of it—everywhere. In some places, such as Russia, it was unregulated last time I checked. Stem cell therapy quickly started to become a popular way of “youthening” among those who could afford it.

But recently, several cases involving Russian celebrities went public. In pursuit of eternal youth, they wanted to reverse the aging process and look younger through stem cells. The treatment seemed to work well for a while. But soon the doctors who did the treatments started noticing a sinister side effect. The treatment propelled the formation of fast-growing cancer cells. Some patients have already lost the battle, dying way before their time.

Here is one review of Novadermy I found:

"I would give this procedure a flat ZERO if I had the chance...My health and life have been devastated by this horrible procedure on so many levels, and I have additionally suffered unending torturous pain. I have spent many tens of thousands on treatments to keep going and to undo the assault to my nervous, lymphatic and other systems. To say this was the biggest mistake and regret of my life is an understatement!"

Some stem cell-based therapies, like bone marrow transplants, are relatively safe and effective. But anti-aging results must be earned. Any promise of quick results is an indication that the product or procedure is working against your body. There will be consequences. 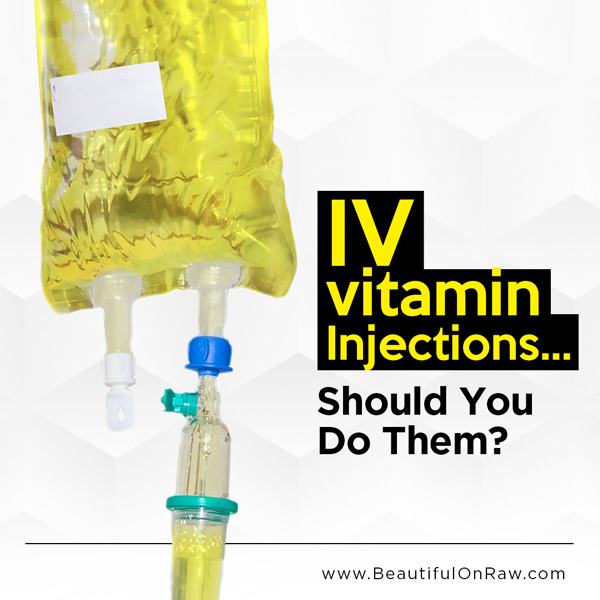 2. IV Vitamin Injections…Should You Do Them?

Q:  Tonya, what do you think about IV vitamin injections? They promise to boost your immune system, give anti-aging results, detox the body and improve your complexion.

A: Wow! Sounds great… No need to juice. Don’t have to bother making salads or green smoothies. You can forget fasting to detox your body. And think of the time you’ll save cutting out that daily beauty routine I promote. A simple 1-hour IV injection, and you have it all.

As my correspondent comments, these IV vitamin drips have become very popular. They promise every possible benefit, from curing your hangover to razor-sharp mental clarity to making you feel and look younger. It’s just… well, it’s utterly fantastic!

For example, here is one for $225, called the Fountain of Youth…
"Hydrate your skin and deliver essential nutrients to strengthen hair and nails. (25 g of vitamin C, thiamine, riboflavin, pyridoxine, dexpanthenol, niacinamide, hydroxocobalamin, biotin, magnesium, calcium plus glutathione push)."

Here’s the idea behind this therapy. If you get your vitamins and minerals through your mouth, the food gets broken down in the stomach and digestive tract, and only half of them gets absorbed. If these nutrients come through an IV vitamin drip, however, they will be absorbed at a much higher percentage.

But are they? Keep in mind after such IV therapy, you’ll be peeing out some very pricey urine for one to two weeks or longer. Why? Because excesses of vitamins will be excreted into urine when the body cannot store any more. And by the way, before allowing you to be given IV vitamin therapy, they want to make sure you have healthy kidneys. The color of your urine depends on what kidneys excrete. If your urine is a highlighter-yellow hue, that is the B2 vitamins that your body couldn’t use.

Also, you can have too much of a good thing. If you take in more of the fat-soluble vitamin A than you need, your body stores it, risking damage to your liver. IV vitamin therapy “cocktails” usually contain large amounts of water-soluble vitamins C and B. But large doses of vitamin C may interfere with the absorption and metabolism of vitamin B12.

Excessive levels of vitamins and minerals will not be absorbed. Your body is way too smart and will want to rid itself of those excesses, which will be hard on excretory organs like the kidneys, ureters, and urinary bladder. Most likely you’ll feel it. Note that people who have had such therapy will comment that when you pee after having such an IV, for a week or even longer you experience a stinging sensation—a good indication that high concentrations of these vitamins and minerals are present in your urine.

There’s another reason I am wary about IV vitamin therapy…
What is opium drug addiction? Opioid drugs create artificial endorphins, which alter your brain. In time, your brain starts to rely on these artificial endorphins and stops producing its own. My concern is that once the body gets used to vitamins and minerals coming by tube through the vein, it will become less efficient in deriving nutrients from foods—even maximally nutritious raw foods. Can I be sure of this? No. But why would I want to risk it?

It’s your body, and your call. If you want to try it or have already started doing it, that’s up to you. As for me, I believe that for almost everyone, there’s no better way to get the vitamins and minerals needed for a healthy body than by eating a high-quality raw diet. It’s easier, cheaper, and much safer than any medical solution. Leave these injections for people who, for one reason or another, have to get their vitamins and minerals intravenously. 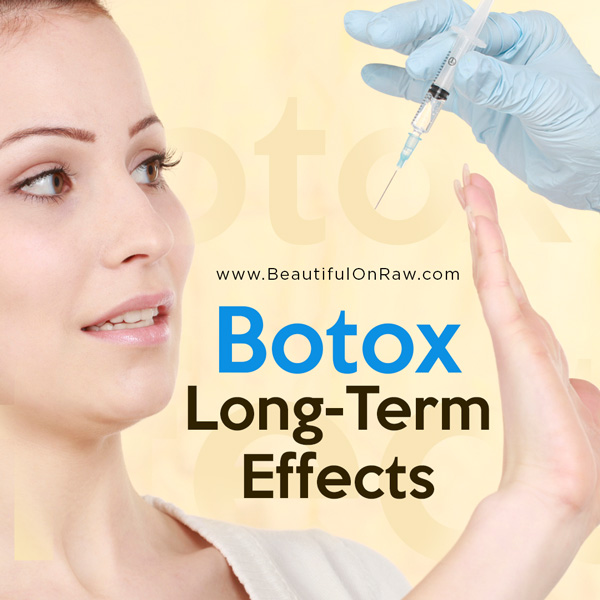 Another question that came recently:
…I’m 29. My friends are all doing Botox, it seems. They say you’ve got to start early to prevent wrinkles. It’s so tempting. I respect your opinion, Tonya. What’s the deal?

I used to think no doctor would ever perform a cosmetic procedure on someone who didn’t need it. No longer true. Surgeons don’t turn people down anymore. The client asks… they do it. They no longer think in terms of whether the patient will benefit from a procedure, providing warnings about consequences. Surgeons will just do it, because they know if they don’t do it, there are others who will.

You’ve seen those aging celebrities and TV personalities who’ve been using Botox for years… Grotesque! They look like they’ve been bitten by swarms of bees. Do you really want to look like that?

You can also see young women on YouTube with frozen forehead and brows. They believe Botox makes them look “better.” And maybe it does, for now.

Consider this...Many women from my generation and beyond also thought a deep tan was the thing to have. Now they must live with the leathery, sometimes cancerous, results. Unfortunately, the Botoxers will find results no less serious within a decade or two.

Ask anyone who has been confined to a hospital bed for more than a month or so. Ask them about atrophy—especially the shrinkage and weakening of leg muscles. Botox can bring about the same thing in your face.

Thinning of facial skin is a danger, too. Dermatological surgeon Patricia Wexler notes that patients who start using Botox in their twenties are at great risk. The skin of their foreheads can thin prematurely, and area muscles can weaken. Result? A heavier look to brows and eyelids. The irony here is this is an “aging” effect opposite to the original intent of using Botox.

If you know my story, you know I’ve had a whole lot of non-elective surgery. I know too well that every invasive procedure leaves in its wake scar tissue. Injections—whether a junkie’s of heroin, a diabetic’s of insulin, or a beauty fanatic’s of Botox—also leave scar tissue. This stuff is very different from the rest of your skin’s tissues. It’s fibrotic, inelastic, inferior, almost dead. As skin becomes thinner over muscles, this scar tissue will most likely create an aptly named “hills-and-valleys” effect, along with discoloration.

Interesting, I am the same age as Jamie Lee. She’s had these procedures, and I never had a need for anything of this sort. It’s my conviction we don’t need them. My methods involve no Botox. No injections, no invasions. You’ll be far better off with the daily beauty routine you perform yourself.

Lasting health, youthful skin, and true anti-aging will only come from placing your body in an optimal condition where it can play out its own rejuvenating magic to the fullest. Only authentic, natural health and beauty practices can give lasting results. They’re not “instant.” They’re a tad uncomfortable at the beginning—a possible cleansing reaction initially. But they work.

Be grateful…That’s the reminder we’re handed at every turn this time of year. And indeed, we all do have many blessings. Our bodies—in whatever state they be—are wondrous blessings. Equally, the body’s truly miraculous rejuvenating abilities are all blessings on their own. Let’s work with the body—not against it.

There is no standing still: You’re either going forward, or going back, either rejuvenating or degenerating. Every day we age, so each day we must do something to slow this process. Eat the best possible diet. Use the best possible beauty routine, and you will be rewarded. 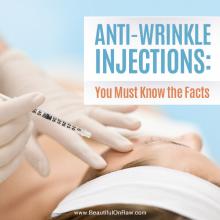 Anti-wrinkle Injections: You Must Know the Facts

Health and Beauty: When Natural and Unnatural Practices Clash

How to Choose the Best Blender for Making Green Smoothies
Raw Foods as a Lifestyle: It Ain’t Just Eatin’
Facial Skin: How Different Is It from the Rest of the Body?
Calendar of Events
Heirloom Tomatoes