How Many Calories are in Raw Foods? 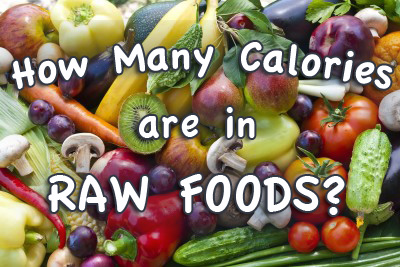 It’s widely believed that raw food doesn’t give enough energy. So how much energy do raw foods provide? Food energy is usually expressed in food calories. So, how many calories are in “unprocessed raw foods” such as bananas, carrots, soaked almonds, pistachios, and the like?

While attending a CR conference in 2011, I approached several presenting scientists with the questions: How is the caloric value of food measured? How much has that method changed in the last hundred years?

Interestingly, without exception, each of them directed me to the “Atwater Method” and its variations.

How was the energy value of food measured a century ago? Answer: By burning it, and measuring the heat given off. How has that changed since? Answer: Not much at all.

Beginning circa 1895, a Department of Agriculture scientist Wilbur O. Atwater devised both the conceptual foundation and the method for measuring calories. The bare idea of this notion was essentially:

Gosh, I love formulas! The mathematician in me gets excited every time I see one. In plain English, this one means that the metabolizable energy of a food—the “available” energy, as Atwater called it—would be the gross (or total) energy it produces, adjusted for loss of energy in feces, urine, secretions, and gases.

Refinements to this method were made by the United Nations’ Food and Agricultural Organization (FAO), but the method we use today remains roughly the same: Burn dried food…measure heat, subtract the combustion energy of whatever the body expels.

Scientists know the method is imperfect. They know, for example, that there are all kinds of discrepancies in measurement. Many acknowledge, too—the FAO itself among them—that the unit we use most customarily for measuring food energy (the calorie or, more properly, kilocalorie or kcal) is far less than ideal.

But more is happening here than mere imprecision. As some scientists grasp, there’s wrong thinking in this entire method. More significantly so when it comes to raw foods. Arguably, the modified Atwater techniques might not be far off, if we’re talking exclusively about all cooked food. The combustion, after all, does roughly mimic cooking, doesn’t it? Yet what about that raw carrot you’re munching on?

If you look at the charts of caloric values of different foods, you’ll notice there are no raw foods present. Even if there is an occasional “raw carrot” that got into it, it’s an absurdity. Caloric value of a raw plant simply cannot be measured with the existing method.

We keep using the same old system because it’s all we’ve got. It just won’t do any longer. There’s something fundamentally wrong in the way we’ve been measuring, even thinking about how we measure energy and nutritional value in food.

But I can still prove to you that raw foods are special and they are the only nutrition your body recognizes. The raw food diet/lifestyle will make you healthy, youthful, beautiful and considerably improve your brain power. And the best part of it: You don’t need to count calories! Read more in Quantum Eating.