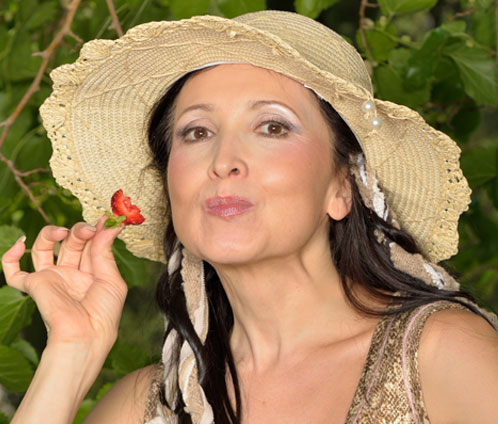 How do some manage to stick with the raw lifestyle for the long-term? And why do others revert, even after initial considerable success? Just eating raw, I believe, is not quite enough to achieve optimal health. How you eat is equally important.

The Chewing Idea Comes to America

Horace Fletcher (1849—1919), known by the nickname—“the Great Masticator” taught and religiously practiced chewing food until it “became liquid and swallowed itself.” According to Fletcher, following this practice would not only increase “the amount of strength a person could have,” but also considerably “decrease the amount of food that he consumed.”

At age 58, Horace Fletcher participated in strength and endurance tests against Yale University athletes. He outperformed the young athletes in all exercises, which tremendously helped to promote “Fletcherism,” as the practice of thorough chewing came to be called. Fletcher also advocated eating only when truly hungry, when in a good mood, and only a moderate amount at each meal.

Consider Saliva and How it Works

Saliva supplies amylase, an enzyme needed for proper carbohydrate digestion, which also fights any pathogenic bacteria that arrived with the food. Moreover, saliva imparts to the eater’s system information about the food that’s being eaten. Lingual lipase is released along with saliva to start breaking down fat while you are chewing. Chewing allows your brain to prepare the right enzymes and digestive juices to match the arriving food.

Chewing can affect the processes of weight loss and weight gain. Fletcher is credited with conducting an experiment that involved overweight army officers and underweight rank and file soldiers. Given the same food, both groups were instructed to thoroughly chew each bite before swallowing. At the end of the experiment, participants in both groups arrived at their optimal weight.

The more you chew, the less you eat. The more you chew, the more legitimate nutritional value you gain from your food. By paying attention to the eating process, and chewing thoroughly, you allow time for your hormones to signal satiation. Bathed in saliva and broken down into smaller parts by teeth, the bolus—chewed up bits of food—begins undergoing efficient digestion before even reaching the stomach, giving welcome help to your hard-working digestive system. Available energy can now be diverted to cleansing and repairing.

It’s my strong conviction that to experience the real miracle of raw foods, one more ingredient is needed. And you need to practice it faithfully…I call it the 30/10 chewing rule—at least 30 times for solid food, at least 10 swishes for liquids, which allows your saliva to start working.

Scientists are finding some evidence that, given good digestion and high quality food, the beneficial bacteria in the human gut can synthesize significant amounts of the vitamin B12.

Chewing just might be the final key to raw food success. There’s nothing simpler. Or harder. It will require a strong will and real effort to develop this practice. But as with everything else, once it becomes a habit, you will do it automatically.

The rewards of thorough chewing will pay off almost immediately in the form of better digestion, reduced food intake, improved health and stamina. The best part: Eating raw foods with total attention and extensive chewing is your formula for long-term success on the raw food diet.

How to Practice Chewing…

Find some time and a place where you won’t be disturbed. Public venues and rushed lunches won’t help. Choose any type of raw food you like. Bring your awareness to the present moment. Focus on the food before you. Bless it. Evoke your senses of smell and touch before you start putting the food into your mouth. Stay in touch with the feelings and sensations in your body you experience in the process. When you are ready, take a small bite, about a teaspoon, and place it in your mouth. Chew slowly. Notice the flavors that get released as you continue to chew until you feel no more flavor, the original texture has been lost, and the food has turned liquid, and then effortlessly send it down your throat.

What to eat? Raw foods are the best for your health and beauty.

When is the best time to eat? Eating only during the first part of the day will give you the most impressive anti-aging benefits. Read my book Quantum Eating and decide for yourself.

Radiation... What Can You Do?
How to Prepare Your Digestive System for Raw Foods
Chewing Guide to Raw Food Success
Transitioning to the Raw Food Diet
Raw Food Recipes