The Best Time to Eat for Weight Loss 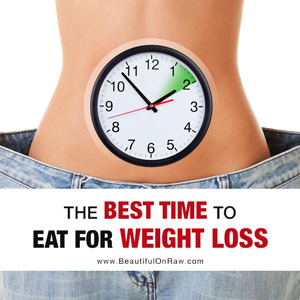 For ten years I have been keeping my mealtimes within eight hour window—an early eight hours—of my 24-hour day. I called it Quantum Eating.

Now, science is catching up. This is evident in a new study is called Time-Restricted Feeding Is a Preventative and Therapeutic Intervention against Diverse Nutritional Challenges. TRF for short.

The restriction is not primarily how much we eat during the day, but more importantly when we eat it. The evidence is mounting rapidly: The time we choose to eat is an important factor in regulating weight, in the long-term.

The study confirms the value of two specific aspects of my Quantum Eating:

* First, restrict your eating times, they say, within 8 to 12 hours.

* Second, all other things being equal, eat earlier in the day rather than later.

Research has focused on the meals consumed at both the beginning and end of the day. The evidence points to eating breakfast regularly as playing a strong role in maintaining healthy body weight. There is also a strong link between night eating and increased body weight/obesity.

The correlation between food timing and body weight is also clear from weight-loss studies. Some 420 people in a 20-week weight-loss program were grouped according to the time they ate lunch, their main daily meal. The later-eating group lost less weight, and lost it more slowly than the early-eating group, with no difference in the amount of energy taken in or expended, diet, or sleep.

Women eating bigger meals at breakfast than dinner lost more weight and showed improved metabolic profiles. However, those who did the opposite – consuming heavy dinners– were more likely to be overweight.

The Latest Science on Weight Loss

Here, more specifically, are some key highlights of current research…

The fairest way to state the conclusions of science, as they now stand, would be something like this:

* Based on experiments on mice, a time-restricted feeding diet has the potential to be advantageous to humans.

* Limited data on human subjects indicates that the timing of eating is a significant factor—among others—in both reversing and preventing obesity and related diseases.

If you wait for definitive recommendations based on human experiments, you’ll be ancient. Science, be assured, will catch up, but it might be of no use to you, personally!

This study in particular, and science in general, still have to catch up on a couple of factors. A major one is the concept of eating all or mostly raw. Expect this to take two or three decades or more. As to the second factor, most of us will be long gone before science officially tunes in to the value of incorporating daily dry fasts.

I care only for getting the best anti-aging results, so I’ll agree with the voice of science where it makes sense, and disagree where it doesn’t. Speaking of disagreement, here’s one break you won’t be getting from me: this idea that you can eat whatever you want—including a high-fat diet—as long as it’s time-restricted.

Scientific researchers have to be both highly cautious and extremely specific. They’re talking about our species generally. Me—I have an advantage: I’m working with an experimental population of one. For over 20 years I’ve been following my version of TRF, and in that time I’ve had to resize my wardrobe—down—three times!

If you’ve lost weight in the past—especially a lot of weight—you know all about that post-weight loss loose skin and flabby muscles—common among dieters eating cooked food. But when you follow a sound raw food program, your body reacts differently.

Raw fruits and vegetables contain water—lots of the best biologically active water. You’ll be well hydrated and well nourished. This will improve the elasticity—and the look—of your skin… On raw foods, your body reshapes, literally reprograms itself. Not only will you lose weight, but you’ll look fabulous!

Science confirms the timing of our food intake is a much bigger factor in body-weight regulation than we previously thought. That said, know that I’ve been testing Quantum Eating since 2006, and I can say this is the best time-restricted feeding method for impressive anti-aging results.