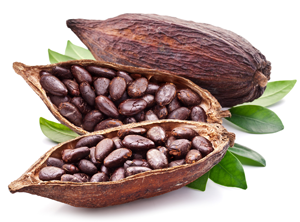 Chocolate, despite a recent revival of enthusiasm, is ancient. The cacao bean is the source of all chocolate, cooked or raw, and has been known to MesoAmerican cultures for thousands of years. Nowadays there is much fascination with this controversial food and its nutritional qualities. Should raw chocolate be a part of the raw food diet?

Raw cacao does offer solid nutritional benefits, as well as some pitfalls to watch out for. Cacao is very high in antioxidants and contains more magnesium than any other food. Magnesium has the ability to balance brain chemistry, which could explain why women crave it during their menstrual cycles. Women may also subconsciously crave chocolate because cacao beans contain rare inhibitors that increase the circulation of serotonin and other neurotransmitters in the brain, which in turn may aid in maintaining and renewing youthful qualities.

Raw food aficionados will ask: What about raw chocolate?

My mother served many years as director of a chocolate factory in Russia. She claims it’s not possible to have truly raw chocolate. There are other experts who question authenticity of raw chocolate.

Cacao grows on trees in South America and the West Indies. After harvesting, beans are traditionally piled on banana leaves and allowed to ferment 3 to 6 days, depending on climate. The fermented cacao is then heated as high as 122 degrees F. in order to remove mucilagenous pulp. Once cleaned, the beans are then ready either to be marketed as raw cacao or processed further into chocolate by roasting, grinding, conching (a special cooking process) and tempering. The result is the common form of chocolate most people know. I admit: Raw chocolate making might very well employ a different technology.

For me, the question whether or not cacao is truly ‘raw’ or not is not an issue—I do not eat chocolate or cacao anyway. Raw chocolate is quite high in calories, so I stay away. It is also very addictive, due to the presence of theobromine, a chemical akin to caffeine.

One day I was giving a food preparation demonstration and used cacao beans abundantly in my recipe. The next day, I got several calls from people who said they couldn’t fall asleep that night.

A prominent figure in the raw food community recently shared how his daily consumption of cacao ended up overtaxing his system and he had to give it up, only eating it now for special occasions. Paul Nison wrote a great article about negative effects of chocolate.

Thirteen years ago, when I was transitioning to the raw food diet, I was a confirmed chocoholic. I would juice in the morning, have my salad at noon, then end the afternoon in the bakery, buying a chocolate cake! I might then have been very glad for raw cacao as a means of weaning myself off this harmful addiction to processed chocolate. Or I might have been be trading one addiction for another.

Thirteen years ago, when I was transitioning to the raw food diet, I was a confirmed chocoholic. I would juice in the morning, have my salad at noon, then end the afternoon in the bakery, buying a chocolate cake! I might then have been very glad for raw cacao as a means of weaning myself off this harmful addiction to processed chocolate. Or I might have been be trading one addiction for another.

I believe there is a very small place for raw cacao for chocoholics in transitioning to the raw food lifestyle —raw cacao is certainly better than a baked chocolate cake. But the sooner you begin using raw carob as a chocolate substitute in your raw food recipes, the better.

As you ascend to new levels of health and awareness, and as you move toward the practice of Quantum Eating, with cacao or with any food substance, your body will eventually tell you what’s okay … what’s acceptable as an occasional treat … and when it’s time to leave something behind altogether. Your body knows. It’s just a matter of listening.