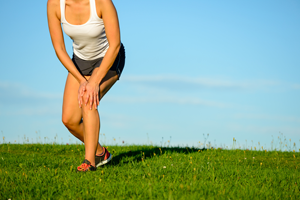 Knees have needs. And when they don’t get those needs met, they present problems. There are several different types of knee injuries. A few of the most common: rheumatoid arthritis and bursitis, along with ligament, tendon, and meniscus injuries.

Rheumatoid arthritis is a chronic disease, tending to appear in flare-ups which come and go. The arthritic knee often swells, getting achy and stiff. Your knee’s motion eventually decreases and leads to deformed joints. Bursitis is an inflammation in the bursae that occurs after a knee injury. It can lead to redness, swelling, aching, stiffness and pain. A torn cartilage (called a meniscus injury), tendon injuries (tendonitis) and ligament injuries are similar in their symptoms, which include pain, swelling, and an inability to extend or straighten the knee.

Bikram Choudhury, founder of Bikram hot yoga, suffered a weightlifting accident to his knee—an injury so severe the doctors pronounced it irreparable. Refusing to accept their prediction, he looked to his own yoga teacher and guru. Bikram developed his series of 26 postures, performed in a room heated to 105 degrees, specifically as a means of healing his own knee problems. He accomplished his goal in six months, using his customized regimen. The result: Hot yoga is a top recommendation for dealing with knee problems and possibly avoiding knee surgery altogether. Your doctor, however, may not be aware of this.

Countless people who have suffered various knee conditions have been told that surgery or drugs, including regular injections, are the only help they will find. Fortunately, many have ventured the alternative route and can testify to the powerful effects of Bikram yoga, not just for temporary pain relief, but for permanent healing. Skiers, dancers, and martial artists who have injured one or even both knees have lauded the healing they have found. You’ll find powerful testimonies on the Bikram Yoga website.

Don’t think it’s only the young who can heal from serious injuries to the knees. Just walk into a hot yoga studio, and you’ll be surprised at the number of over-fifties you’ll see there, sweating and stretching. Has hot yoga become the latest fad among the bingo set? No—the fact is hot yoga works when nothing else does.

During my travels, in all my Bikram yoga classes, I see people who have turned to hot yoga to deal with their knee troubles. Many find the Fixed Firm Pose to be the most healing. What’s “hot” about hot yoga is, well, the heat. It’s invaluable when performing this and other knee-challenging poses—the heat is soothing and helpful in giving the freedom of movement to perform poses more fully, more correctly. Many find Bikram yoga has saved then from “inevitable” knee surgery. They keep coming, and soon other health problems get resolved, too.

Still others have claimed that their knees are better now, after some time doing Bikram yoga, even than they were before they were injured. How long before you’ll see a difference? It varies. The time needed may depend on the injury itself or on how often the person can attend class. Based on numerous individuals’ testimonies, incredible results from Bikram yoga often begin to appear after just a couple of weeks. Pain and swelling start to go away in arthritic areas, including the knees.

During the Bikram sequence, your body is continuously flushed with fresh blood, increasing circulation. The effects of heat and sweat include a flushing-out of toxins, further helping the body heal. A raw foods diet greatly enhances these benefits and can accelerate healing even more.

After several hip surgeries I still had problems with alignment. Whenever I tried to do the Head to Knee Pose with Stretching Pose (something like the Hurdler’s Stretch runners use) I felt sharp pain in my left knee. I knew hot yoga’s therapeutic, restorative routines would bring my skeletal system into proper alignment. I persisted, gently, respecting my own limits. After a few months the pain subsided. It’s never returned. I don’t even remember precisely when the misalignment disappeared, but now I can work the pose comfortably.

I wholeheartedly recommend a combination of a raw foods diet and regular Bikram yoga practice for a long list of physical complaints and problems. I’ve definitely had my share of problems. But I’ve overcome just about all of them with this unbeatable duet of diet and exercise. Add the raw food diet to your Bikram yoga practice and you can beat, I believe, just about any injury and any physical ailment. Knees are no exception.

If you’re considering knee surgery, it’s entirely possible that trying raw foods and hot yoga may, over time, save you much in pain, rehabilitation and surgical costs. I cover all these miraculous benefits in my latest book, Raw Foods and Hot Yoga. I’m no stranger to surgeries or physical therapy, and now I know that I no longer have to endure either. And that, to me, is priceless.