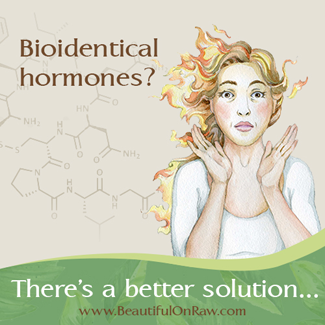 What are bioidentical hormones?

Bioidentical hormones are custom-mixed formulas containing various hormones that are chemically identical to those naturally made by your body. These prescription and over-the-counter products are marketed as being tailored to a woman's individual hormone needs, typically determined through saliva hormone testing.

"Bioidentical" hormone replacement therapy (BHRT) is the use of supplemental doses of steroid hormones with a chemical structure identical to endogenous human hormones (hormones naturally produced in the human body). Generally BHRT is prescribed to relieve the symptoms of menopause, though more recent therapies promise anti-aging effects and possible deferral of the diseases of aging. BHRT differs from conventional hormone replacement therapy, which by definition uses animal or synthetic hormones whose structures differ from those produced in the human body.

Bioidentical HRT is synthesized in a lab, made from plant extracts. (They definitely have more cachet than Premarin®, which is made from mare’s urine!) The claim is that bioidenticals replicate exactly what our own bodies produce.

Hormones, natural or synthetic, were never meant to be introduced into the body in the form of a cream, pill, or anything else science might think of. Such intrusive methods create an imbalance in the natural order.

If you get too much of bioidentical hormones, you have side effects; the same goes for testosterone, DHEA, HGH, thyroid, and the adrenal hormones.”

Suzanne and many other women made a decision to take natural hormones because they had every menopause symptom in the book. But when women eat mostly raw vegan foods, hot flashes, irritability, breast tenderness, dryness, painful intercourse, water retention, and sleeping disorders all disappear or never start. My menopause was totally uneventful. No symptoms at all! More in the article Raw Foods and Menopause.

Calorie-restricted monkeys do not show the steep declines in hormone production. These bioidentical hormones are intended to simulate a calorie restricted diet. The lure of these calorie-restriction mimetics (CRM) to some people amazes me. They will do anything, pay any price except to eat less. The simplest, most effective, and, finally, the cheapest solution of all.  You can get all the benefits by going straight to the real thing — “raw and low” instead of pills and shots!

When You Eat Matters, Not Just What You Eat.

Human Growth Hormone, also known as somatotropin, is one of many endocrine hormones. What makes GH special that the body can produce large amounts of GH right into old age. It is the most abundant hormone secreted by the pituitary gland.

Just like estrogen, progesterone, testosterone, melanin and DHEA, Human Growth Hormone production declines as we age. However, this hormone is superior to all the other hormones because when it is replaced it supposedly not only prevents further biological aging, but reverses its signs and symptoms.

Growth hormone levels go up when insulin levels go down, about four hours after a meal. James Jamieson and Dr. L. E. Dorman, experts on hormone replacement therapies in the book Growth Hormone: Reversing Human Aging Naturally state: “It is at this point that the fat burning potential of GH tends to be at its daytime peak. But remember, the largest burst of GH is released during the early hours of sleep — hence, our evening eating habits are crucial to maximizing this nighttime secretion.

By avoiding food during the last four hours before bedtime we may enhance circadian growth hormone release, and fat burning potential.” More in Quantum Eating: The Ultimate Elixir of Youth.