Hot Flashes—What Are They Telling You? 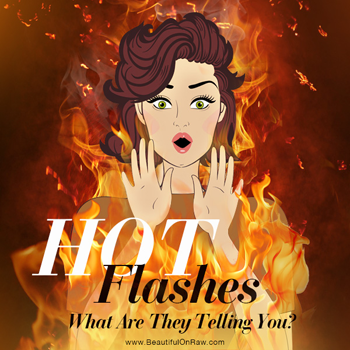 My Pilates class is mostly an over-40 crowd of women. Many complain about hot flashes. It’s getting too hot for them to exercise. They’re asking to turn the thermostat down.

Hot Flashes! For some women, that name is apt indeed. Intense flashes which can happen day and night, lasting minutes or longer. And, in accompaniment, sweating, dizziness, light-headedness, and even heart palpitations. About 85% of women will experience hot flashes sometime during menopause.

How often and for how long? Some women complain about having “about ten” hot flashes a day. Others: a flash every ten minutes or so, all day long. These are the most extreme cases.

It’s not unusual to have hot flashes for several months after your last period. For a few, those hot flashes will carry on for years after menopause. Some have suffered as late as their eighties.

How do these hot flashes feel? Women have often described in vivid language. For some, it’s a creepy sensation rising from the feet and running through the whole body. Some women feel a hot flash of a rather more incendiary sort, a burning that runs chest to neck to head and back again. For some, the feeling is more diffuse, spreading over the whole body, while for others it’s quite localized—a burning in the stomach, for example. The kind of hot flashes a woman will experience is as unpredictable as their duration.

Doctors believe the hypothalamus—the section of the brain that regulates body temperature—is a key player. It’s known that lowered estrogen levels are causally responsible in some way. Exactly how is still a mystery.

You don't have to suffer! Here’s a related phenomenon that’s yet to come under the researchers’ microscopes…People who eat mostly or entirely raw foods—never processed foods, and including daily juicing—seem not to experience hot flashes. Traveling on the lecture tour, I’ve met many women who’ve changed to raw foods and have had very uneventful menopause.

I went through menopause at 55. My periods just stopped. That was it. Not so much as a single hot flash! Mode swings…night sweats…weight gain…middle spread…fatigue…I had none of these. I'm 63 now. I credit my super easy menopause to raw, unprocessed foods. Read more about my experience in my book Quantum Eating.

Why are hot flashes always accompanied by profuse sweating?

Answer: The body is trying to rid itself of toxins. The more sweat, the more ridding. Note: When you sweat, your body temperature drops. Sweating is good, this way.

This affects the hot-flashes situation as well. You experience a hot flash when your body temperature rises. Cranking that AC makes you feel better. Temporarily. But when you don’t let your body sweat, you only make things worse. Your next hot flash is likely to be more intense and they may start coming more often. But there is more … If you don’t let your body sweat and thereby release toxins, you might get a lot of skin blemishes in your 50s and 60s.

One day in my Pilates class we're short—just me and one other, younger woman. She didn’t mind sweating, so we convinced the instructor, a 54-year-old woman who always suffered from hot flashes, to turn off the AC so we could sweat through our workout. The next day the instructor told me that, while she’d found the exercising time itself rather uncomfortable, she felt very good afterward. She had slept deeply, she said—better than she could remember in the last 10 years. Sweating out toxins can have some immediate ameliorating effects on menopause symptoms.

How to relieve hot flashes naturally If you experience menopause symptoms, your doctor might suggest a hormonal replacement therapy. You might even be diagnosed with overactive thyroid and given medications. Your naturopath might suggest one or two supplements from the endless variety available.

My suggestion: Just sweat. Try a sauna. Remove processed foods completely from your diet. Juice daily. Don’t eat at night. And you will be surprised … Your hot flashes will bother you less and less. And when you eat lots of raw foods in unprocessed form, you’ll be much able better to tolerate the heat of the summer or of intense exercise.