Plants that Clean the Air 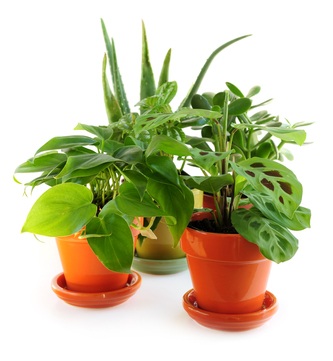 Did you know there is a simple, cost effective way to ‘clean’ your home, and it comes in a 6-inch pot of dirt? Did you figure out what it is? - Houseplants.

A 2 year study in the late 1980’s, launched by NASA revealed that common everyday houseplants are highly effective at helping to combat the so called ‘sick building syndrome.’ Originally, these scientists were looking for ways to purify the air in orbiting space stations, but the study proved to have more far reaching ramifications. They tested a couple dozen common houseplant varieties and found many to be so efficient at capturing and removing pollutants from the air that some plants will be sent aboard future space stations as part of the ‘biological life support system’. The top three pollutants that the scientists tested for were Formaldehyde, Benzene, and Trichloroethylene because of their ubiquity in today’s office buildings and homes.

Formaldehyde is present in almost every building because it is commonly used in insulation, in particle board used for making office furniture, and in consumer paper products such as facial tissue, paper towels and grocery bags. Urea-Formaldehyde resins are used as water repellents, fire retardants, stiffeners and adhesives in carpet backings and floor coverings. Formaldehyde can cause headaches, dermatitis, irritation of the eyes, nose and throat and asthma. And there is indication that it may be responsible for an unusual kind of throat cancer.

Trichloroethylene (TCE) is used in the dry cleaning and metal degreasing industries as well as in paints, varnishes and adhesives. It is considered a potent liver carcinogen.

How Plants Can Help

From seeing how many items we use or encounter every day contain these toxins, eliminating these toxins from our homes and workplaces may at first seem hopeless, especially for those that live in big cities. The good news, however, is that plants produce their own food through the process of photosynthesis. In a perfect symbiotic relationship with mankind, plants take in carbon dioxide from the atmosphere and release oxygen.

We breathe the oxygen and kindly return to them carbon dioxide so they can repeat the process. Photosynthesis, in essence, cleans the air by absorbing carbon dioxide along with a host of other pollutants. In Dr. Wolverton’s book,“How to Grow Fresh Air: 50 Houseplants That Purify Your Home or Office” he explains how plants emit water vapor that creates a pumping action which pulls contaminated air down around the plant’s roots. From there it is converted into food for the plant.

Top Plants to Have in Your Home

NASA issued a list of the top most effective houseplants for purifying indoor air. Listed below are the top ten plants that were shown to be most effective for removing Formaldehyde, Benzene, and Trichloroethylene:

Most of these plants should be readily available from a local nursery. NASA’s recommendation is to use about fifteen to eighteen houseplants in an average sized home of approximately 1,800 square feet, but adding even a few houseplants to make your interior environment more green, will be beneficial.

With a sunny window and a cup of water once or twice a week, you can improve the quality of the air you breathe daily as part of a healthy, purifying lifestyle. Not only that, but an assortment of houseplants lends beauty and tranquility to the atmosphere in your home, and that is very healthy indeed!