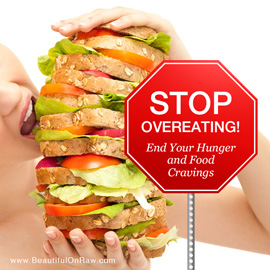 A University of Alabama at Birmingham pilot study found hard evidence for one of my Quantum Eating teachings. So says the study, when people eat all their calories within a six-hour window, they burn six percent more fat, with more stable hunger levels than those who eat the same amount over twelve hours.

Lead author Courtney Peterson said: “It kind of makes sense. Your body's fat- burning ability peaks after you’ve been fasting for twelve to fourteen hours.” Peterson noted that up to twelve hours after the start of a fast, the body is still burning glycogen, a molecule that stores glucose. After twelve hours, the body starts to burn fat.

The study tested eleven overweight people between the ages of 20 and 45 in two different week-long stages. During the control period, starting on day four, participants consumed all calories in the twelve-hour window of 8:00 AM to 8:00 PM, roughly mimicking “normal” North American eating patterns. In the other period, also starting on day four, participants ate all their calories between 8:00 AM and 2:00 PM.

Peterson said there was a nearly thirteen-hour period, typically during the night, when fat-burning levels were elevated in participants who consumed calories within the six-hour window. In addition to this increased fat burning, the study also found that hunger levels (measured by individual estimation on an arbitrary scale) fluctuated less for participants on the six-hour eating plan than those on the twelve-hour plan.

The sample size is small, and the experiment cries out for repetition on a much larger scale. (See a new study here: The Best Time to Eat For Weight Loss. Peterson hypothesizes that waiting till later in the day to consume a last meal may set us up for binges or for other unhealthy eating patterns. This remains a possible testing scenario.

What’s becoming clear beyond doubt… We have scientific ground for saying, “It’s not just what you eat, but when.” The issue clearly goes beyond just the old cautions about avoiding Dagwood’s legendary midnight sandwich. A carefully planned program of healthy eating—a program that ends early in the day—can make a real difference in your quality of life. You can learn more in my Quantum Eating book. What do you do if you feel hungry later in the day?

How to Deal with Hunger

Alexander Voroshilov, a Kiev, Ukraine doctor and dietician, performed a supervised fasting of more than 20,000 patients over twenty years. One of his findings: We can relieve the feeling of hunger when fasting (or when food is unavailable). Once the acidic stomach juices start coming, and food isn't, we feel the discomfort we associate with hunger. When we’re able to drain the stomach of those digestive juices, the feeling of hunger departs. How can you drain your tummy of that acid? Simple… squeeze it out!

Here's how… Inhale. Suck your tummy in. Hold your breath to a count of 4, then exhale normally. Repeat this ten times. This sequence takes about a minute.

Why does it work? Voroshilov explains that as you inhale, your lungs expand and press on your diaphragm. This, in turn, presses on the stomach. Your sucked-in belly helps to squeeze the stomach from the bottom and create pressure inside. Stomach acid then drains down the GI tract and gets neutralized by the tract’s alkaline environment, sparing us not only from hunger pangs, but from bad breath, stomach ulcers, dental cavities, and white coating on the tongue. This breathing method can also decrease your appetite and prevent overeating if you practice it before a meal.

Solution to Hunger and Food Cravings

I’ve been practicing Quantum Eating for more than ten years. I’m so used to not eating after 2:00 PM that not only do I not feel hungry during the second part of the day, but I don’t even have thoughts about food. Our bodies are that adaptable. Try it and you’ll never have to worry about extra weight or hunger pangs again.

Quantum Eating-Review in Get Fresh! Magazine
Live Blood Analysis: Raw Food Works
How to Curb Your Appetite at Night
I Eat Healthy…Why Is My Energy Level So Low?
Quantum Eating by Tonya Zavasta