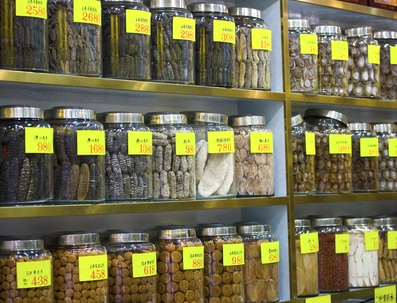 One reader unsubscribed from my newsletter and provided the following comment:

"Raw food is very bad for people with a ‘damp’ condition in Chinese medicine and I don't think it should be promoted across the board as if it is good for everyone. My stomach likes warm food, I have learned, so I have been eating the worst food possible—that is, raw!—for my condition."

Traditional Chinese Medicine (“TCM”) states that everyone falls into one of five body types: the Yang / Hot … the Damp/Phlegm … the Yin / Cold … the Dry … and the Neutral. Using the term “type” suggests a situation that is inherent, unchanging and unchangeable. I happen to agree with the term my reader uses, “condition”, which suggests that it can change with lifestyle choices.

TCM's Prescription for the Damp Condition

Chinese medicine, in one formulation, recommends a certain eating regimen for those enduring the “Damp/Phlegm” condition: “Raw food tends to be cold and damp. Unless you have a Hot Phlegm condition with cooked down green phlegm, avoid raw salads and uncooked food. Steam or stir-fry your veggies instead.”

Only one of TCM’s five essential conditions has a name that implies health. It’s the so-called “neutral” condition.

These Conditions are Not Permanent

When I look myself up in charts that describe the various conditions in TCM, I come up with two answers. When I find a description in terms of how I used to feel, look, behave, I come out—just as my reader does for herself—as exhibiting a “Damp and Phlegm” condition. When I find the description of how I look, feel, and behave today, now that I’ve been raw for fifteen years, I come out—you guessed it—“neutral.” That is to say: healthy.

We Can All Be "Neutral"

Fact: I’ve changed. Fact: You can change, you can move toward and into the “neutral” or truly healthy condition. More about the intersection of Eastern medicine and raw foods in this article: Eastern Medicine and Raw Foods.

Steaming and stir-frying vegetables even reminds us of what we North Americans think of as Chinese food, doesn’t it? And these are indeed the major ways of preparing food in China, where the diet for most consists of steamed rice, stir-fried vegetables and a small amount of meat. You’ll not see many Chinese folk in China who are overweight. That certainly is the observation of my son, who’s been living in the People’s Republic for the last four years. But you do, he noted, see many sick people, just as in the USA.

TCM is all the rage these days, but just because it is a practice with a long history does not mean we need to blindly follow it either. Is eating dog meat in the winter really going to improve circulation? Will eating tiger penis really make a man more virile? Will eating bird’s nest soup made from the saliva of a swiftlet improve the immune system and alleviate asthma?

TCM prescribes small frequent cooked meals for improving digestion, but from my experience the result was quite the opposite. But having only two raw meals with intermediate fasting (such as by following a Quantum Eating regimen) helps to heal the digestive tract faster. For the Damp/Phlegm condition specifically, TCM assigns eating cooked whole grains. I’ve found that the raw food diet with no grains at all gives much better results.

Experiment and Be Willing to Change

Seeking health means change. It means being teachable, being willing to learn. It means experimenting, trying out new things for yourself, and refusing to be slave to preconceived notions of what you have to endure, have to do.

So … investigate. Read. Read my books. Read more widely too—Chinese medicine included. But even more importantly: Experiment. On whom? On you, of course. Find out what moving toward raw foods, eventually right into the raw lifestyle, will do for you, for your body and mind.