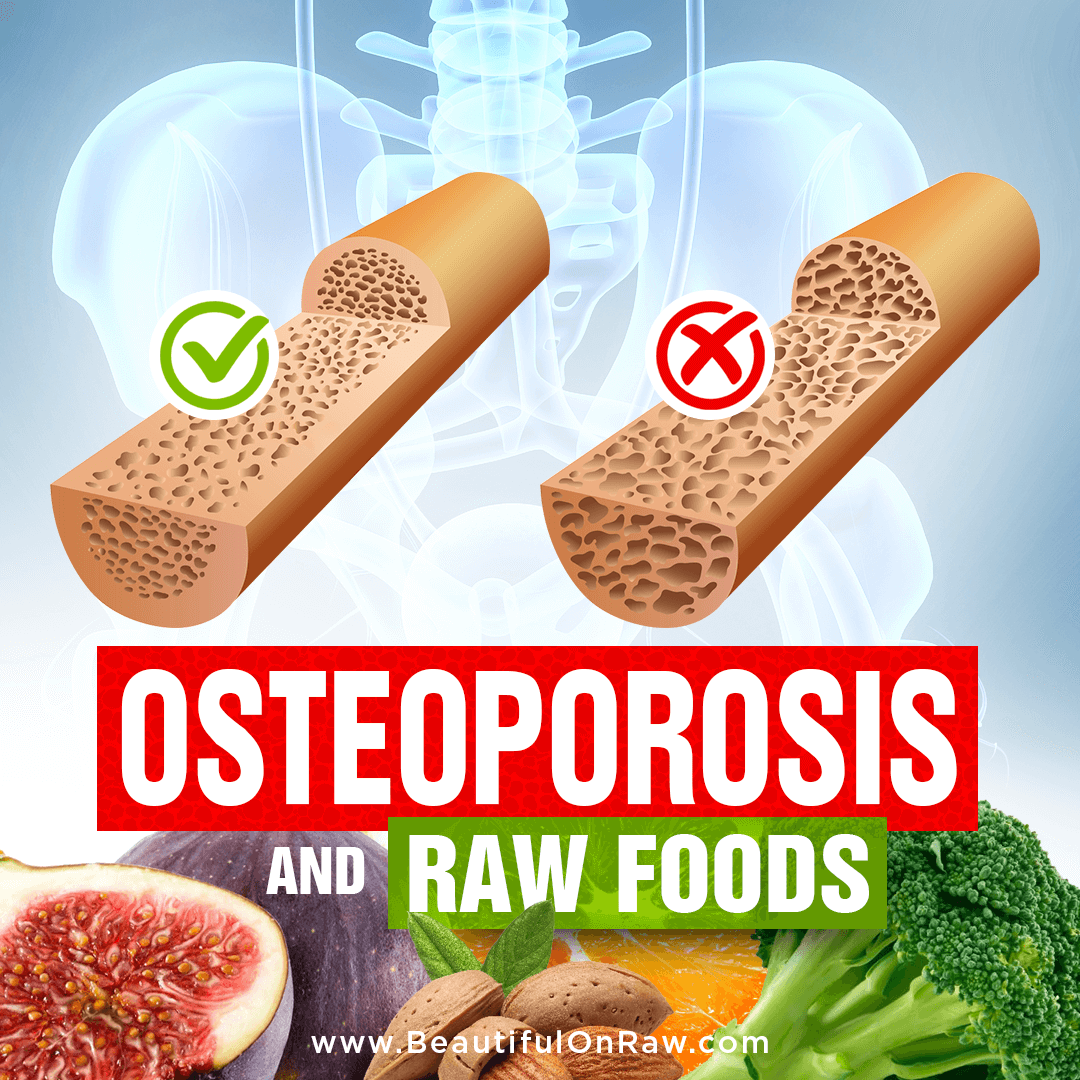 When switching to mostly raw foods, you’ll lose some weight, especially if you’re carrying some extra poundage. So your bones will be less stressed. As a result, vegetarians who eat only raw, plant foods tend to show low bone mass.

Such a deficiency is usually an early indicator of osteoporosis. But researchers have also found that raw vegans generate new bone faster than nonvegans even though they are not consuming calcium-rich dairy products. In that light, weight-bearing exercises are of great importance to compensate for your lighter weight.

Let’s look at how the human body builds bone mass. Applying pressure to a bone will cause that bone to exhibit stress. That stress, measured in the form of an electric charge, brings the body’s attention to that place. In your body, this electric charge attracts the necessary minerals to the stressed location, adding density, building bigger and stronger bones. The more stress, the stronger the bone. As always, your body responds to the environmental needs you face.

Getting enough sunlight is also vital to bone health. Sunlight on your skin generates the production of Vitamin D, which is essential in order to make use of calcium for maintaining bone mass. Calcium in foods or supplements alone is not effective without the addition of Vitamin D.

Regarding osteoporosis, the first thing that comes to mind is lack of calcium. This isn’t necessarily applicable, however. It’s often underappreciated that calcium is a minor factor in preventing and reversing osteoporosis. Rather, osteoporosis results from poor diet, lack of physical exercise, insufficient exposure to natural sunlight, and an imbalance of hormones. The primary dietary cause of osteoporosis is the consumption of highly acid-forming foods: refined white sugar, flour, soft drinks, cookies, candies, sweets, desserts, coffee, and anything cooked. Any nutritional supplement will only increase the imbalance.

Silicon is another important mineral. Bones must be bendable, not breakable. Just like trees they must be able to withstand hurricane-force winds without breaking. Bones will break if they are composed of too much calcium. They will bend only if enough silicon is present.

Silicon, though plentiful in the body, has been largely overlooked until recently. Extensive research by Edith Carlyle and Karl Schwartz has helped bring this mineral’s importance to the forefront. Their experiments have demonstrated silicon is necessary to prevent bone deformities and promote bone strength and flexibility. About seven grams of silicon are found naturally in the human body. However, silicon is more heavily concentrated in younger bones and declines as calcium becomes more prevalent.

Silicon must always be maintained at a healthy level because it regulates the distribution of calcium and phosphorus in bones. Moreover, silicon’s presence increases the effectiveness of calcium, vitamin D (which is actually hormone), and glucosamine, all of which are essential for bone health, flexible joints, and beautiful skin. A severe decline in levels of silicon can result in the onset of bone diseases such as osteoporosis.

There is even some evidence Egyptian mummies that reveal strong bones had much more silicon present in their bodies than our contemporaries. If you’re trying to build strong bones, eat a lot of “shinyskinned” raw veggies. Red bell peppers and many of their cousins in other colors, cucumbers, and tomatoes are all fine examples. See my take on Nightshades here. A shiny skin on produce says: silicon-rich. Pistachios are also credited for building healthy bones. All these are classics in any raw food regimen.

Organic Vegan Diet
The Anti-Aging Benefits of Pomegranates
How to Juice at Home
How to Get Rid of Acne Scars Naturally
Hot Yoga: Cure for Bursitis