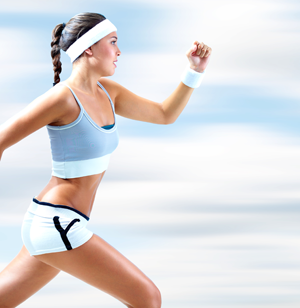 In hospital during several rounds of hip surgery, I met and saw people with varied injuries. To my surprise some were runners who had injured themselves one way or another. Now they needed artificial hips or knees.

It’s more than a matter of fitness, for some runners. It’s an addiction. Not to the running itself, necessarily, but to that “runner’s high.” The so-called “runner’s high” is, be assured, quite real. Once endorphins enter the bloodstream, they can create a pronounced euphoria.

But the runner’s high isn’t the same for everyone. And despite the title, runners are not the only ones hooked on it. Any aerobic exercise or cardio workout can give you a “high.” Some say it’s akin to ecstasy, while others describe a numb, relaxed feeling, almost “druggy.” Still others say they reach a feeling of invincibility and overwhelming happiness. Whatever the individual experience, it’s all those jolly endorphins running about your body!

Cardio workouts in your everyday exercise are important to your heart, lungs and cardiovascular system to work more efficiently. Over-exercising or too-strenuous exercise can, however, actually break down your body, and can be hard on the adrenal glands. Is there another, safer way to get the same desirable results (or better) and enjoy the runner's high?

Bikram yoga not only builds up your body, strengthening and toning, but many are surprised to find hot yoga is a cardio-enhancing workout. Ask anyone who’s done hot yoga. Some will tell you not only about the fitness benefit but about the “high” they get afterwards.

Bikram poses keep your heart rate up and your respiratory system strong and active. Abundant fresh blood flushes throughout your body. Your brain also gains stimulation from varying blood pressure and oxygen circulation. Muscles contracting and stretching lead to endorphin release. Bones become stronger, working against gravity, and reap refreshing supplies of blood and calcium. Every Bikram class starts and ends with a breathing exercise that even further oxygenates your body.

Compressing and extending body parts increases blood circulation, flushing out toxins as fresh blood, nutrients and oxygen flood in. When you’re on a raw foods regimen, you especially want this to happen. Why? Because your bloodstream is clean and nourished, and increased circulation and oxygenation causes it to reach places where normally it might not. Every body area continuously gains strength—bones, muscles, and all the body’s major organs and systems.

You’ll experience much less likelihood of injury in Bikram yoga than in running, so you can plan on pursuing yoga well into your seventies!

If you understand the importance of aerobics and want the healthiest, most efficient exercise, you’ll find challenge and delight in hot yoga. Delight enough, indeed, that I often go twice a day! In my latest book, Raw Foods and Hot Yoga, I explain why this form of exercise outweighs almost all others in benefits, including that euphoric feeling you’ll walk out with after each and every class.

Have a Better Bowel Movement Today!
How to Grow Taller
Hot Yoga High vs. the Runner’s High
Monkeying Around With Calorie Restriction
Far Infrared Sauna

Best wishes for success in delivering your important message to others! You certainly had a profound effect upon me - I'm now 90% raw and down 15 pounds + feeling more full of energy than ever before… Read more
Laura (July, 2008)