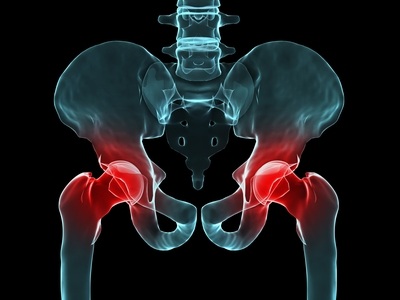 Persistent arthritic pain in the hip area brings people to hip replacement surgery. The hip is a “ball and socket” joint. The pelvic bones (the socket) and the end of the femur (the ball) form the hip joint. A smooth layer of protective cartilage covers both bones at the joint allowing a full range of rotation. Loss of this cartilage from wear-and-tear, as a consequence of running, cycling or jumping, can cause arthritis. Inflammation and injury are other common causes.

I turn 52 in January, 2010. When I was born (in the former Soviet Union), my hips were dislocated. For the first three years of my life, I walked on dislocated hips because no one diagnosed the problem. My right hip became so crushed that the doctor had to chop off the head of the femur. After this surgery, on my first walk, the femur bone moved upward, and my leg became much shorter. It sounds barbaric, yes, but this was standard medical procedure for hip issues like mine back there back then. The artificial hip was not yet available in the USSR.

Years later, I had to have both hips replaced with titanium ones. For me, artificial hips are technological blessings. With their help, the orthopedists made my legs even. I cannot be more grateful. But this was not the end of my struggle for even gait.

I walked with a limp almost all my life, and my body skewed to compensate for the shorter leg. It took four year of Bikram yoga (hot yoga) to bring back a decent measure of alignment to my body. Now, if you didn’t know the story, you’d never even notice. Considering the magnitude of the misalignment I started with, I consider this a miracle.

Alignment is extremely important, and hot yoga addresses this very issue. Your body is pushed, pulled, twisted, straightened and brought into balance while ligaments are stretched, muscles are strengthened, and bones move into proper alignment. Heat improves your circulation while providing pain relief, and sweating removes toxins.

My dear childhood friend started to have pain in her hip. An orthopedist diagnosed her with severe osteoarthritis. He prescribed a hip replacement surgery as the only solution. Margaret was still in her fifties, so she was distraught about the prospect. She was clutching at straws: “What about physical therapy? Would swimming help? Just tell me how many hours I need to swim to reverse this condition?” The doctor turned serious and said, with more than a touch of sarcasm, “Swim all day—and you only get 15 minutes for lunch!”

Swimming and physical therapy just won’t help in this situation. But hot yoga is different. It stretches the ligaments around the joints, allowing fresh blood to flush out hard-to-reach places. If, moreover you’re following a raw food diet, the combination of yoga and diet will cleanse your blood, help your injuries heal faster, and may even re-build worn-out cartilage.

There are incredible testimonies of people who, with the aid of hot yoga, have not only avoided hip surgery but have healed their hip disorders. Some have completely healed themselves with Bikram yoga after horrific car accidents. Even twenty to thirty years after an injury, people have experienced healing after only a few months of Bikram yoga. I meet such people often in my travels.

I had hip replacement done on both sides. Now, looking back, I am confident I could have avoided the surgery on my left hip if I had only known ten years ago about Bikram yoga. The arthritis I had there might have been reversed with hot yoga and the raw foods. Had I known back then, at least I would have tried. What did I have to lose?

What Do You Have To Lose?

What do you have to lose? Surgery should always be your last resort. If you have hip problems, realize that you may be able to turn things around by embracing the raw foods diet and daily hot yoga practice. At least try, so that you won’t regret not trying later. Read more in my latest book Raw Food and Hot Yoga.

Since early childhood I had eleven surgeries on my hips. From those operations, many toxins and poisons were pushed into my body. So my healing process was one which took much patience and perseverance. It was my raw foods lifestyle that helped me not only to recover but to move to a much higher plane of health than I had experienced before these surgeries.

If you practice hot yoga daily while yoking it with the raw foods diet, you could potentially alter and even reverse physical dysfunctions. If hip surgery is truly unavoidable, it is important you learn about the raw food diet and how it can aid your quick recovery. In my experience with raw food and hot yoga, there is nothing you can’t conquer!

Raw Food Before and After Photos
Anti-Aging Practices for Your Skin and Body
Probiotic Supplements: Pros and Cons
Diabetes and its Effects on Aging
My Chewing Bliss Experience