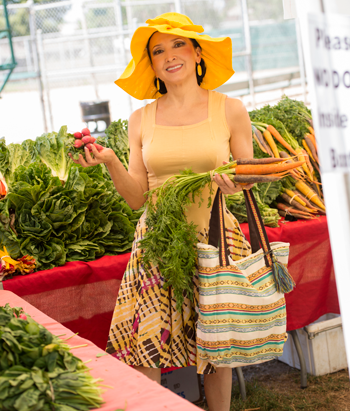 Your mom said it first…”Eat Your Vegetables!” Health was often her motivation, though her reasoning wasn’t necessarily all that scientific: Carrots help your eyes see better, moms have been saying for decades, though the science on the subject is shaky. You need your roughage is another mom standard, this one much better founded. But did your mom ever say to you Eat up your vegetables—they’ll make you pretty…?

Carotenoids are the ticket. Foods with high levels of these nutrients include carrots, tomatoes, sweet potatoes, bell peppers, cantaloupe, spinach and kale. Beyond the other well known health benefits of these foods—antioxidants, most importantly—the carotenoids they carry bring helpful pigmentation. Color counts.

Recent findings published in the journal Evolution and Human Behaviorhave shown that you can literally “eat your beauty food.” Is there really a food for beauty you may wonder? In fact, the study, by Ian D. Stephen, Vinet Coetzee, and David I. Perrett found that both Caucasian and African populations find faces more attractive which convey a certain warmth of color—a measure of “yellowness,” if you will.

Carrots, oranges, yellow and red bell peppers, cantaloupes—these rather obviously carry yellowish pigments. But you can find the same carotenoids in leafy greens such as kale and spinach. Consume a solid share of these, and you’ll be imparting a glowing warmth to your skin tone.

The new study is, significantly, a work in psychology rather than nutrition. Why is that meaningful? Because beauty is every bit as much a matter of psychology—of perception—as it is of nutrition. The study subjects’ perception of attractiveness in the faces they observed  showed that the glow imparted by carotenoids proved more attractive than the look of a suntan.

One warning … Raw is the way to go. Yes, kale, carrots, cantaloupe, tomatoes, peppers—they’re all great. But they are greatest raw. Naturally occurring desirable chemicals in foods, the moment cooking begins, begin to alter through chemical reaction, to disappear, to become unavailable to the body’s natural absorption mechanisms.

Fact: The brighter a fruit’s or a vegetable’s color, the more nutritive value it brings, the better its ability to equip your body with the antioxidant or other disease-fighting capabilities it needs. Remember grandma’s boiled spinach? Remember how the life in those lovely green leaves faded, and all their color got poured down the drain? It’s the same with a bell pepper roasted on a barbecue, the tomato boiled in a soup or a slow-cooked stew. When the color goes, nutrition disappears as well.

The healthy, warm glow that Stephen and his colleagues learned was most attractive to their test subjects is the same glow that I and other raw foods advocates have earned, personally. Firsthand experience says: It comes only from raw foods. The message is clear—now not only from the raw foods community but from mainstream science as well: You’ve got to go with carotenoid-rich vegetables, and with a good raw foods regime overall. It’s not only a matter of choosing which ones to eat, but of how to eat. In my second book, Beautiful on Raw, I give you recipes for delicious dishes you can make from raw foods—dishes that will make you beautiful!

Like many other women who have converted to raw foods, I no longer wear foundation, concealer or powder. Those would only mask my naturally healthy color and hinder the glow that comes from naturally health-giving foods, including carotenoids. Find out for yourself! Even in winter, when sunlight is scarce, your skin can be healthy, well hydrated and show a healthy glow, all without artificial means. Now you have one more reason to eat food for your beauty—and some scientific proof to go with it!