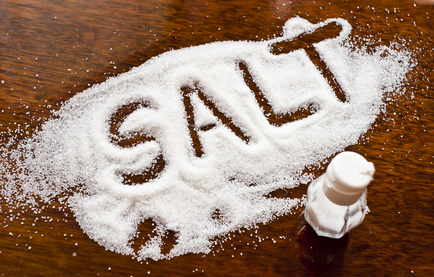 Raw food restaurants and the taste of fancy gourmet dishes once lured me. Raw food preparation looked sacred to me, and someone who could prepare a living raw dish seemed a priestess of a ritual art. I savored this food, craved more, was quite smitten with it. And was surprised when I didn’t feel good afterward.

I could never sleep well after such restaurant dinners, or after a raw food potluck. Sure, they were fun. But the aftermath was gas and indigestion. I would get a burning sensation, the result of the salt everyone thought was so healthy—pink Himalayan salt, or Celtic salt, Nama Shouy, Brag Amino Acids, all that good stuff—not to mention poor food combinations and spices overused.

Salt is poison no matter where it comes from. Consider… It’s definitely not raw…and it’s not a food per se. As the old question goes: Animal? Vegetable? Or mineral? If you’re reading this, you’ve rejected animals as food or are well on the way. Plants are our proper food. And mineral? Well, we are not naturally eaters of rock.

As my friend Joel mentions, some of the experiences raw foodists go through in their first year can be likened to the torture of initiation into college fraternities or sororities. You become part of a whole new community, in which raw food restaurants and potlucks are part of the fun. While body and mind are adjusting to your new lifestyle, these culinary opportunities can be vital in helping you stay on track. Raw dishes mimicking transitional meals can make a difference in whether or not you make it on raw foods. But the cleaner and healthier your body gets, the less inclined you may be to indulge. This is what happened to me early on, and my experience mirrors that of many others who have been on the raw food diet for substantial times.

We are taught to believe salt is vital, that we’ll perish without it. Such irony! In China, salt has been used for centuries to commit suicide. Westerners—North Americans especially—are addicted to salt. Remember your last Big Mac and fries? The Western world is quite literally killing itself with salt, and even we raw foodists sometimes unwittingly perpetuate the myth that we “need” salt on or in our foods.

Let’s get our facts straight. It is sodium, not salt (or sodium chloride, NaCl), that our bodies need. Sodium is a component in blood, sweat, tears, and digestive juices. Sodium is essential for physiological functions such as muscle contractions, nerve impulses, and maintaining fluid balance.

Sodium is a vital mineral the body cannot manufacture on its own. But we need sodium only in trace amounts, and it must come in an organic form for the body to use it. Sodium occurs in all natural raw foods, and is properly assimilated only when delivered to the body along with minerals such as potassium, calcium and magnesium. For the body to assimilate a gram of sodium, it needs 1 or 2 grams of calcium. High-sodium diets lead to daily calcium loss. The raw food diet delivers sodium with the nutrients needed for absorption. Read Your Right to Be Beautiful for more detailed information on the hazards of salt.

Cooked food needs salt because, without, it has no flavor. Why? Cooking compromises food’s mineral structure, altering and usually reducing its capacity to deliver taste. But raw foods taste marvelous by themselves.

Recommendation to fledgling raw foodists…Let your first step be to give up the harsh, unbalancing substance we call salt. Many people say they crave salt, when what they’re ‘hearing’ is usually only the body’s cry for minerals. Start adding the zesty flavors of celery, Swiss chard and other greens in place of salt.

For several years I’ve avoided eating at potlucks and at some raw restaurants on account of the salt issue. Nor am I on the chocolate bandwagon, in my recipes I use carob instead. Finding suitable foods on the menu of a raw food restaurant or on the raw food potlucks smorgasbord can be a challenge. We still have this preconceived idea that the more complex a dish, the more glory goes to the chef. Your digestive system feels otherwise. Its mantra: Simplify, simplify.

In some raw food recipes, salt amounts are practically lethal. In my new book Raw Food and Hot Yoga. I’ve reduced them, and made all salt additions optional. Raw foods are tasty without salt. Neophytes can learn this only by eating saltless. Check out my Quantum Eating for simple salt-free recipe ideas.

When you transition into a more advanced raw food regimen, such as Quantum Eating, you’ll begin to appreciate so much more the simple taste of original fruits and vegetables. Recipes are less involved, much easier not only in preparation but in digestion and assimilation as well. The more advanced you are on your raw food journey the more simple recipes become. The time will come when you will say: “These recipes sound delicious, but just give me an apple!”

One benefit you’ll quickly realize is that you’ll no longer need to get up, parched, in the middle of the night, in search of water, as I used to after indulging myself at raw restaurants and potlucks. “Water retention” will become a thing of the past.

Raw foods potlucks are wonderful social events where people share their triumphs and failures, gaining the inspiration they need to go on. But, please, when you bring a dish, consider other people’s digestive systems. Afraid they won’t like your dish if you don’t add salt and spices? No. Use the simple rule: The fewer ingredients you use, the better. Use salt sparingly, if at all. This way, you’ll ensure people still like you after they eat your food!