How to Avoid Genetically Modified Foods 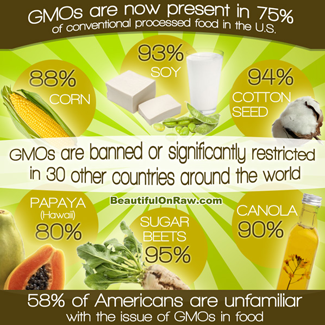 The continuing genetic engineering (GE) of our food is one dire experiment with the point of no return once the modified plants start to spread throughout the environment.

The animal-based studies clearly indicate that genetically modified food damages the immune system and organs of rats, including liver and kidneys, and causes mammary tumors.

For now there are no long-term studies looking into the consequences of prolonged consumption of GMOs for human health. But there are plenty of scientists concerned that GE crops may create new allergens and GMO foods may transfer antibiotic resistance to those who eat them, potentially leading to bacterial diseases for which there will be no cure.

Naturally, anyone interested in pure, unadulterated foods, wants to avoid foodstuffs which have been genetically modified.

The catch: It's hard to tell. While the EU has strict GMO labeling requirements, those of us living in the United States aren't so lucky: current labeling laws don't require foods containing GMOs to be identified on labels and there are no restrictions on selling GMO foods.

Packaged foods are highly likely to contain GMO products. Some studies indicate up to 80% of processed foods contain some GMO ingredients. This is because the most common GMOs, such as soy, canola, sugar beets and corn appear as added ingredients in many processed foods. Whenever you run across commonly listed ingredients -Amino Acids, Aspartame, Ascorbic Acid, Sodium Ascorbate, Flavorings, High Fructose Corn Syrup, Hydrolyzed Vegetable Protein, Textured Vegetable Protein - more likely than not, they contain GMOs. As you can see from some of these ingredients, merely going vegan is not going to protect you if you still include processed foods in your diet.

Look for the USDA Certified Organic label. Under USDA guidelines, the use of GMOs is prohibited in organic products. To meet the USDA organic regulations, farmers and processors must show they aren't using GMOs and are actively protecting their products from contact with GMOs. There are well-founded concerns that some GMOs invariably contaminate organic crops due to drift and cross pollination, but going organic is still our best hope.

Select Foods from Varieties Less Likely to be GE.

Among the foodstuffs most likely to be genetically engineered, according to Green America, are soybeans, cottonseed, canola, corn, alfalfa, sugarbeets, and milk, along with American-grown papaya. Zucchini and yellow squash are sometimes GE.

Whatever your diet, this is a good idea. Farmers markets and co-ops often feature foods from local growers who don't sell GE food or use it as animal feed. It is also easier to stay informed on what local producers are doing to their food.

In the fifties and sixties, gardens were popular in the backyards of North America. Then they disappeared. Now they're back, and gardening is distinctly hip. Grow your own favorite veggies, but use GMO-free seeds!  If you have enough space for your own garden, then try to subsist on as much of those fruits and veggies as you can, since that's the only time you can truly know where your food is coming from. Another reason why the Quantum Eating plan could be invaluable: by eating less, you can maximize the proportion of your consumption coming from your own garden.

You name the fruit or vegetable ... Common or exotic, it's a guarantee that some variety of this species has been grown in a genetically modified way somewhere. Common examples: rice, soy, potatoes, corn, peas, tomatoes, apples. Lesser known varieties are often (though not always) safer bets, GMO-wise. For instance abocha squash, sunchokes, Chinese okra and rhubarb are quite unlikely to be GMO.

What will save you from the known and unknown risks of GMO foods and food additives is one super-smart, super-diligent consumer: you.